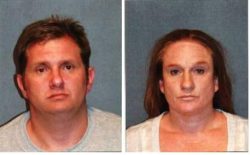 SANTA ANA, Calif. – A nephew was convicted yesterday of shooting and murdering his uncle after an argument at a birthday party. Daniel Lee Duvall, 39, Westminster, was found guilty by a jury on Feb. 23, 2017, of one felony count of first degree murder, and a sentencing enhancement for personal discharge of a firearm causing death was found true. Duvall faces a maximum sentence of 80 years to life in state prison. The court will hear a bifurcated trial on Duvall’s prior felony conviction for transportation of a controlled substance and possession of a firearm by a felon for the benefit of a criminal street gang in 2002 at his sentencing on April 14, 2017, at 8:30 a.m. in Department C-38, Central Justice Center, Santa Ana.

Co-defendant Tina Pauline Arbogast, 49, Westminster, is charged with one felony count of accessory after the fact. If convicted, the defendant faces a maximum sentence of three years in state prison. Arbogast is scheduled for a pre-trial hearing on April 14, 2017, at 9:00 a.m. in Department C-5, Central Justice Center, Santa Ana.

On the evening of March 8, 2015, Daniel Duvall attended a birthday party being held for Arbogast at her home in Westminster. Approximately 15 to 20 people were in attendance at the party.

At approximately 10:00 p.m., Daniel Duvall got into a verbal argument with his uncle, 56-year-old Frank Duvall, inside the home. At some point during the argument, Daniel Duvall brandished a loaded firearm.