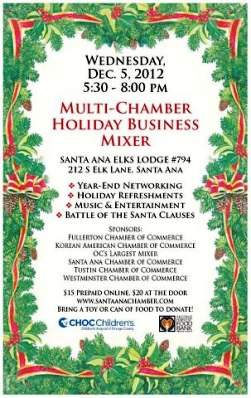 The event will feature Year-End Networking, Holiday Refrshments, Live Music & Entertainment, and a “Battle of The Santa Clauses.”

$15 prepaid online at http://www.santaanachamber.com/ or at your perspective Chamber or $20 at the door! Bring a door prize for added exposure!  Bring an unwrapped toy or a can of food to donate to Choc Children’s Hospital or to the Second Harvest Food Bank.