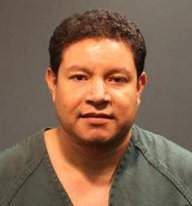 Details: On 09/20/14, Juan Carlos Guadarrama arranged to meet his estranged wife at a location in the 1200 block of East Dyer Road in Santa Ana. During their encounter the suspect assaulted his estranged wife with a knife, stabbing her multiple times; the suspect also shot the victim with a pellet gun, causing great bodily injury. The victim was transported to a local trauma center in critical condition.

SAPD Homicide Detectives were assigned the case and obtained a no bail warrant for the suspect’s arrest for Attempted Murder. On 9-23-2014, they received information that suspect Guadarrama would be in the area of State College and Ball Road in Anaheim. During a surveillance of that area Detectives located Guadarrama at a local park and took him into custody without incident. He was booked into SAPD Jail for the charge of Attempt Murder and held on the no bail warrant.