Happy Endings are Extra opening at Santa Ana’s Theatre Out 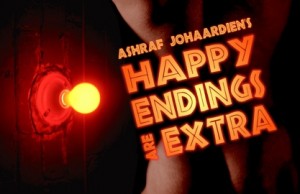 “Happy Endings are Extra,” a new stage production by Ashraf Johaardien, is opening at Santa Ana’s Empire Theatre, located at 202 N. Broadway, Santa Ana, on Friday, Oct. 2.  The Theatre Out production will run through Oct. 25.

Johaardien’s drama concerns a middle-aged Cape Town bisexual who falls under the spell of a teenage male prostitute. As the man’s infatuation boils over into obsession, his carefully compartmentalized emotional life crumbles, wrecking his relationship with his longtime girlfriend. (Chicago Reader).

Happy Endings Are Extra started out as a tribute to the victims of the Sizzlers Massacre which took place in the early hours of the morning in an ordinary unmarked suburban house in Sea Point, Cape Town on Monday 20 January 2003. Seven employees of the parlour, a client and the owner were massacred. They were found tied up and shot, execution-style in the back of the head, at close range. Most of them also had their throats slit. A tenth man survived.

Rather than attempting to document the actual details of the massacre, the play only makes a passing reference to what transpired on that gruesome night and instead Ashraf has woven a cautionary tale that is both brutal and beautiful; and which charts a terrifying journey into the ambiguous areas of sexuality and emotional dependence.

About The Playwright: Ashraf Jogaardien is an award-winning South African
playwright, performer, columnist, and arts manager. He was born in Cape Town but now lives in Johannesburg where he is the general manager of the Arts & Culture Trust (ACT).

In 2008 he featured on the Mail & Guardian’s list of Top 200 Young South Africans.
His plays have been performed and produced at mainstream theatres and across South Africa, in Ireland, the UK, the Netherlands and this will be his fourth production in the USA. His other plays include Coloured Son X, STRIPPED, Miracle, Ecce Homo! adapted from Body Blows: Six Performances by Tim Miller and The Quiet Violence of Dreams adapted from the novel by K. Sello Duiker.

Ashraf is also the author of The Perfumed Closet, a monthly column published in The Pink Tongue (Independent Newspapers, Cape Town). His first short story entitled Through the Looking Glass appeared in the collection entitled Cheesecutters and Gymslips compiled by Robin Malan and published by Umuzi Ramdom House. Ashraf and Robin are currently working together on a new collection of gay South African writing called Yes, I am! and they have plans to collaborate on a solo performance of Hamlet in 2010 which Robin has adapted and which will be performed by Ashraf.

Click here to read about the cast and crew.