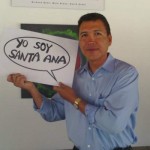 Mayor Miguel Pulido and Councilwoman Michele Martinez rejected the pay raise for the top city executives while City Councilman David Benavides was absent – as he is on his honeymoon having just married his Parks and Rec Commissioner, Erika Carranza, this weekend. Martinez noted that the 2.5 to 5 percent salary increases given to executive staff for performance aren’t available to rank-and-file employees. She proclaimed that the raises are “unequitable.”

If you would like to let the City Council know how you feel about this ridiculous decision click here to send them an email.

Sarmiento is rumored to be challenging OC Supervisor Andrew Do in next spring’s primary election.  I can’t imagine that voting to give the City’s fat cat executives an unwarranted raise is going to help him get votes.