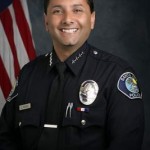 Former SAPD Police Chief Carlos Rojas just  resigned in Santa Ana but he has already landed a new job. Rojas is the new Police Chief for the BART (Bay Area Rapid Transit) subway system in the Bay Area, according to the San Francisco Chronicle.

Rojas is taking over from the former BART Police Chief, Kenton Rainey, who retired last December.

Rojas is leaving the SAPD because he was a complete failure. On his watch crime zoomed up in Santa Ana. Three years into his tenure we are averaging a shooting just about every day. He also demoralized the once proud SAPD.

It is fitting that Rojas is heading to BART, another troubled agency. Look them up on Google and you will find that over the past few years BART officers have shot innocent people and beat up women while also harassing minorities.

Here are the official press releases from Carlos Rojas and from Bart:

I have had the privilege to serve the residents of Santa Ana over the last 27 years. I have dedicated my life’s work to public service and will always cherish the relationships and experiences with the community to improve public safety. I’m confident that members of the Santa Ana Police Department will continue to strengthen their partnerships with the community to provide the most professional police services possible.

Carlos Rojas will be BART’s new Chief of Police

General Manager Grace Crunican announced today the hiring of Carlos Rojas as Chief of Police, welcoming him to BART from the Santa Ana Police Department, where he served as Chief for five years and as an officer since 1990.

Rojas brings 27 years of extensive experience and leadership in community policing. He is not only an advocate but also an educator in Community Oriented Policing practices, having trained the discipline to national police forces in Central America and having taught and mentored college students on the subject. He also brings a wealth of Homeland Security expertise and knowledge to the District.

“The police department has been moving in the right direction, and I am confident that our new chief will accelerate our efforts to increase the visibility of police officers on our trains and in our stations,” said General Manager Grace Crunican. “I have asked the new chief to focus attention on our police recruitment practices to ensure the department is able to hire a full complement of officers.”

BART’s Citizen Review Board participated in the hiring of the new police chief.

“Chief Rojas is a great choice and I’m confident he will provide strong leadership as the Department’s new Chief,” said Cydia Garrett, the groups’ chairperson.

Rojas is a recipient of multiple law enforcement Medals of Valor, and is bilingual in English and Spanish. He holds a Master of Science in Criminal Justice from Chapman University, and a Bachelor of Science in Criminal Justice from California State University, Long Beach, with additional professional training at the FBI National Academy. He is BART’s first Latino Chief of Police.

BART’s offer is contingent upon Rojas’ successful completion of psychological exams and a satisfactory background check, which could take up to 30 days to complete. His start date is still to be determined but will likely be sometime in late May or early June.