Caltrans proposes modifications to the 55 Freeway 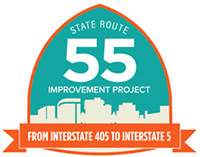 After years of discussion with the California Department of Transportation (Caltrans), the Orange County Transportation Authority (OCTA) has finally agreed on a solution to the present issue of highway congestion on State Route 55. Orange County voters approved a measure in 2006 to add new highway lanes in each direction within the existing right-of-way. One of the measure’s newest projects specifically deals with the addition of lanes on SR-55, between the I-405 and I-5. Caltrans and OCTA have discussed several possibilities to decrease the ongoing congestion for this portion of the highway. After extensive collaboration, both entities settled on the addition of new traffic and HOV lanes.

On May 6, 2016, Caltrans offered a new idea, suggesting the addition of two traffic lanes and an HOV lane on each side of the highway. Adding this many lanes would require a reduction of shoulder and lane widths, contradicting some of OCTA’s current highway standards. Along with existing funds, Caltrans has $46.8 million in their State Highway Operation and Protection Program that can be used towards the project. However, further design and analysis of this project’s environmental impact will have to occur before anything can officially be determined. Caltrans and OCTA will continue to work together throughout the process to ensure safe and efficient highway operations.