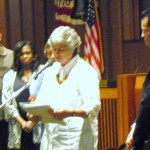 Councilman David Benavides chose to ignore common sense and the advice of his fellow elected officials and honored a group of folks that included a member of a hate group and her supporters at last night’s Santa Ana city council meeting.  The councilman from Ward 4 presented a certificate of recognition to the members of the American Independence Day Planning Committee whose members include hate group member Lupe Moreno and her supporters Thomas Gordon, Rosemarie Avila, Anita Hynds and Anne Menaldo.

The certificate was scheduled to be awarded at the July 6th council meeting but it was abrubtly pulled from the agenda after myself and others contacted city hall and questioned the reasoning behind the awarding of such an honor to a known hate mongor and her supporters.  After council members saw a videotape of the event in which Gary Hynds, husband of one of the people Benavides was honoring, refers to Latino residents of Santa Ana as “fu*king wetbacks” they told Benavides they would not support him proceeding with the honor.

An angry Benavides stormed from the council chambers before the business portion of the meeting began and thus ignored the duties he was elected to carry out.  At that point the rest of the council thought the issue was put to bed but last week Benavides informed them that he was going to proceed with the honor for Moreno and company.  Despite getting numerous calls from his fellow council members urging him not to go through with it Benavides forged ahead and presented the certificates to the group.

Obviously Benavides convinced Moreno and Gordon to stay away, though he did provide certificates for them, but Moreno supporter Anne Menaldo was there to accept the certificates on the groups behalf.  Benavides did make a brief mention of the unfortunate incident involving Mr. Hynds but otherwise he tried to deflect criticism and attention away from the fact that he was honoring those involved with hate groups.

As Benavides began his presentation to Menaldo Mayor Miguel Pulido and Mayor Pro Tem Claudia Alvarez got up and left them room not wanting to sanction the event.  Councilmen Sal Tinajero and Vince Sarmiento remained but once the presentation was over both men spoke and made it clear that they were not in support of the award of the certificate or honoring hate group members and their supporters on behalf of the city council.

When Mayor Pulido and Mayor Pro Tem Alvarez returned they too expressed their disappointment and disdain for Benavides awarding of this certificate to Moreno and the others that support her.  They both wanted the public to know that they stepped down from the dais and left the room because they in no way wanted to be associated with this presentation.

There were also members of the public, including myself, that expressed our disgust for Benavides decision to honor folks involved in hate group activities.  I think we all believe that many good folks were involved in planning this event but the whole thing was tainted by Moreno and her supporters.

I have been attending Santa Ana council meetings for more than twenty-five years and in that time I have never seen a sitting councilmember rebuked by his colleagues the way Councilman Benavides was last night.  Every member of the council that was there stated their strong opposition to Benavides giving this award and that was simply unprecedented.

Councilmembers Carlos Bustamante and Michele Martinez were out of town on city business and were not in attendance last night.  I do not know where Bustamante stands on the issue but I did speak with Martinez on the phone prior to the meeting and she assured me that if she were there that she too would have rebuked Benavides for giving out this honor.

Word on the street is that Benavides has his eyes on the 69th Assembly District seat help by Jose Solorio when Solorio is termed out.  His terrible miscalculation last night will not help him in his quest.  Surely Democratic leaders statewide will be made aware of his decision to honor Lupe Moreno and others if they haven’t been already.  I have been told by a reliable source that some well connected labor officials were watching quite closely and that could be a fund raising disaster for Benavides.

I am not sure why Benavides feels like he needs to kiss up to the “usual suspects” and other right wing operatives.  His continual support for these folks and their agenda cannot be endearing Benavides to his colleagues.  I hope he will use last night as a learning experience, if not his time on the council could get much more difficult going forward.

« Does Mayoral candidate Amezcua realize there is more than one school district in Santa Ana?
Taller San Jose looking for volunteers for Light up a Life 2010 »