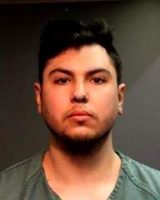 SANTA ANA, Calif. – An appointed Orange County Superior Court commissioner Friday reduced bail to $20,000 for a man charged with two counts of vehicular manslaughter in connection with a street racing crash that killed two people after the car they were in crashed into a tree and burst into flames. The other driver fled the scene after watching the car burn with the two men inside.

Damian Chavez, 24, of Bellflower, was arrested on April 18, 2020 following a year-long investigation by the Santa Ana Police Department into the April 20, 2018 crash on Bear Street between Alton Avenue and Segerstrom Avenue in Santa Ana.

Jerman Marquez, 39, and Richard Inda, 29, both of Santa Ana, died in the fiery crash.

Chavez posted the $20,000 bail shortly after 11 p.m. Friday, just hours after the unelected court commissioner ordered Chavez’ bail to be reduced from $100,000 to $20,000 over the objection of prosecutors. The commissioner referenced the current COVID-19 pandemic in explaining his decision to reduce the bail.

Prosecutors appeared before the commissioner for a second hearing Friday to ask for a reconsideration to the bail reduction. The commissioner left the bail at the reduced $20,000.

The population of the Orange County jail system has been reduced by more than 40 percent over the last six weeks in an effort by Sheriff’s Department officials to reduce the spread of COVID-19 within the jails. Social distancing, new quarantine rules for incoming inmates, and the increased use of technology for court appearances has significantly reduced inmate movement to further slow the spread of the virus.

“Knowing the inherent – and potentially deadly – risks, this individual chose to engage in illegal street racing which resulted in the deaths of two people,” said Orange County District Attorney Todd Spitzer. “The Santa Ana Police Department worked diligently to track down this dangerous driver, and within a few days he’s back on the street. Our law-abiding residents are being ordered to stay home, but dangerous and violent inmates are being allowed to walk out the front door of our jails and right back into our communities on $0 bail or substantially reduced bail. This pandemic cannot be used to defy common sense. This has to stop.”

He faces a maximum of 11 years in state prison if convicted of all charges.

« Santa Ana now has the most COVID-19 cases in Orange County as of April 27
No Santa Ana street sweeping tickets, but public asked to move vehicles »