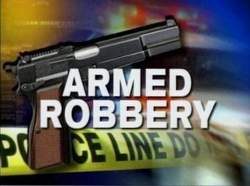 Occurred 4/22/2017 at 7:45 p.m., the suspect described as a Male (White or Hispanic), 30-40 y/o, 5’5-5’7”, thin build, wearing a navy blue hooded sweatshirt and blue jeans. The suspect pulled the hood of the sweatshirt over his head in an attempt to conceal his identity. The suspect points a handgun at store employees and demanded money. Employees provide the suspect with an undisclosed amount of U.S. currency which he takes and flees the business in a westbound direction on McFadden from the business. Santa Ana Police Robbery Detectives are currently investigating two additional robberies at different Santa Ana Metro PCS locations. They believe these crimes may be related. Anyone with information as to the identity of this suspect they are asked to contact Orange County Crime Stoppers at 1-855-TIP-OCCS.