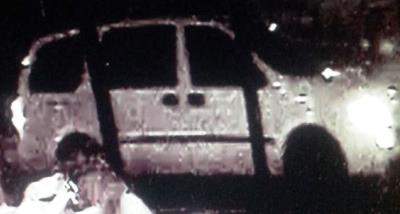 SYNOPSIS: On 10/07/14, at about 2218 hrs., three male blacks entered The OC Recording Company recording studio under the pretense of recording an album. The owner/victim told the male black suspects he was not aware of an appointment at that time, but requested they wait outside. The suspects then entered the business and produced handguns.

The suspects tied up the owner/victim and a second employee/victim of the recording studio. As both victims were tied up, the suspects questioned the victims about the value of their studio equipment and location of a safe. The victims cooperated with the suspect requests. During the robbery, the suspects stole several pieces of high- end studio equipment, which included microphones, guitars, and miscellaneous computer equipment.

The neighboring business’ surveillance captured the above depicted vehicle during the time of the robbery.