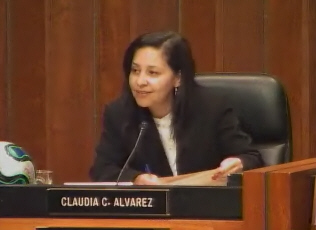 McLoughlin and Chapel are of course toast.  Area 5’s voters break down like this – 33% are Latino, 27% are Asian and presumably the balance are white (41%.)  But Chapel and McLoughlin are going to split the white vote.  That should put Alvarez in the catbird seat.

Of course there is more to it than race.  The Republican bloggers at the OC Political blog agreed that Alvarez has a distinct advantage, based on these factors:

Alvarez has always won by huge margins, as a City Council candidate.  I have no doubt that she will win and do so easily in November, much to her detractors’ chagrin.  She certainly has my vote.  McLoughlin disappointed me when he opposed the completion of the Santa Ana Creek bike trail, which runs by his neighborhood.  There should be no room for NIMBY’s on the RSCCD Board.

As for Chapel, he is a far-left tax and spender.  No thanks.