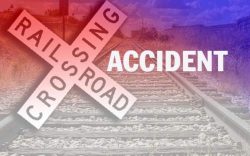 A Metrolink train hit a car in Santa Ana this evening that apparently got too close to the train tracks, at about 6 pm. this evening.

Metrolink reported that the train was number 812 and the accident temporarily closed the train tracks between Santa Ana and Orange.

The driver of the car that was struck was apparently uninjured.

The accident happened at 17th and Lincoln.

The train track was cleared about a half hour after the accident.