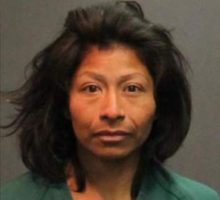 Amy Martinez, a 12-year-old girl, was walking to Lathrop Intermediate School this morning when an apparently deranged 34-year-old homeless woman, Claudia Cruz Hernandez, aka Claudia Hernandez Diaz, put her in what Martinez referred to as a bear hug and started walking away with her, according to KTLA.

Martinez bravely screamed for help – and Hernandez responded in Spanish by admonishing the little girl not to cry.

Martinez told NBC that Hernandez also told her that “the demons are coming, Satan is here.”

And that is when a mother who had just dropped off her own child at Lathrop drove by and saw what was happening. She immediately came up with a plan to stop the suspect, according to the SAPD.

The Good Samaritan, who asked to remain anonymous, then took Martinez to school.

The Good Samaritan also gave the SAPD a detailed description of the suspect, and the SAPD then “saturated” the area and was able to track down and arrest Hernandez.

There is no telling what might have happened to Martinez if the Good Samaritan had not taken the initiative to save her.

Clearly Santa Ana’s homeless problem has become a flaming mess and our children are now in danger!

« The SAUSD is using videos to train teachers and staff on how to handle a school shooting
California’s Big 11 Mayors and State Lawmakers announce Legislation for $1.5B to address the homeless crisis »