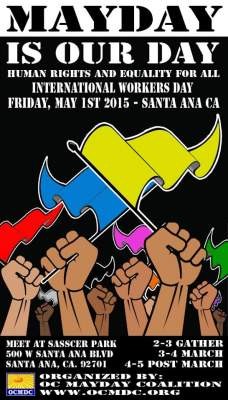 The event is organized by the OC Mayday Coalition.

About May Day (from Wikipedia)

May Day on May 1 is an ancient Northern Hemisphere spring festival and usually a public holiday; it is also a traditional spring holiday in many cultures. Dances, singing, and cake are usually part of the celebrations that the day includes.

About the Orange County May Day Coalition

The Orange County May Day Coalition is a community-centered coalition of organizations and individuals; member organizations include:

In 2011, the Coalition worked tirelessly to win a more just impound policy in Santa Ana, California. The issue of unjust towing became a battleground when cities such as Maywood and Montebello seized cars in immigrant communities to raise cash. In Orange County, Santa Ana impounds more cars at state-funded drunk-driving checkpoints than any other police agency.

Currently, OCMDC is working on ending the collaboration between ICE and the SAPD and stop the detention and incarceration of our family and friends.

« What the politicians had to say at the 2015 O.C. Victims’ Rights March & Rally
Another bloody Sunday in Santa Ana as a man is found slain by El Salvador Park »