Woke OCDA candidate Pete Hardin is an L.A. resident and he was caught trashing O.C. voters 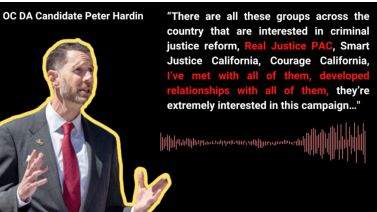 In addition to the derogatory comments about Orange County, Hardin can also be heard bragging about his plans to buy the election with the help of millions of dollars from the same billionaires and Super PACs that propelled George Gascon to office in Los Angeles, and Chesa Boudin in San Francisco.

The cherry on top is found in Hardin’s official campaign filing documents, which reveal he is a resident of Los Angeles County.

Hardin’s comments and residency shine a spotlight on his brazen attempt to parachute into Orange County, a community he looks down on with disdain, to install the same woke version of criminal justice reform that has failed so miserably in Los Angeles and San Francisco.

“These chilling tapes make clear that Pete Hardin wants to destroy public safety in Orange County by buying this election and implementing the same radical, pro-criminal agenda that has been an unmitigated disaster in places like Los Angeles,” said Orange County District Attorney Todd Spitzer.

“The woke criminal justice movement represents an existential threat to our community, and I am going to do everything in my power to keep Hardin and his billionaire buddies the hell out of Orange County,” Spitzer continued.

The audio, along with the below quotes, can be heard in the latest ad from Orange County District Attorney Todd Spitzer’s reelect campaign: https://vimeo.com/604283647

“A lot of our brothers and sisters, uh, Angelenos, uh, sort of think of us as the ugly stepchild perhaps.”

“There are all these groups across the country that are interested in criminal justice reform, Real Justice PAC, Smart Justice California, Courage California, I’ve met with all of them, developed relationships with all of them, they’re extremely interested in this campaign…But some of them are big PACs that can put a lot of money into a race. You know if we can raise a million dollars, great, we’ll do everything we can. But that might be chump change compared to what some of these outside groups can bring in.”

8 thoughts on “Woke OCDA candidate Pete Hardin is an L.A. resident and he was caught trashing O.C. voters”