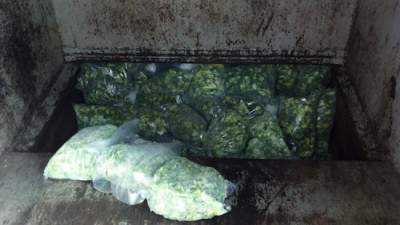 Picture courtesy of the OC Weekly

“The Santa Ana Unified School District is looking into programs that will allow us to donate excessive food that we are not able to use because of over ordering or food that was not used in production. We are in communication with other districts such as Los Angeles Unified that have similar donation programs.”

UPDATE: SAUSD Superintendent Thelma Melendez de Santa Ana has responded to the charges raised in this post, via email.  As always we thank the Superintendent for her prompt response and feedback.  Here is her response:

After meeting with our Deputy Superintendent, who oversees our Food Services team, he informed me of the following in response to your inquiry:

“We have been diligently working with the food services department to review and identify operational efficiencies and improvements in the areas of food safety, food costs, and forecasting of student demand. These best practices are designed to build in accountability, identify and reduce waste, and ensure food safety.

One of the practices implemented just after the school year began is a daily “discard log”, which records the types and quantity of food that is discarded in an attempt to track and reduce waste. Although the District has adopted measures to improve food service operations, it is fully aware that there are still opportunities for improvement.

The OC Weekly was sent pictures of hundreds of pounds of lettuce rotting at a warehouse belonging to the Santa Ana Unified School District.

Their source Told them that “all of this lettuce would eventually be destroyed. The amount of food the district destroys is so much, according to said sources, that officials are sending rotted food to individual schools so they can dispose the boxes themselves.”

How did this happen?  How did our elected School Board members ignore this?  There are two incumbents running for re-election right now – Jose Alfredo Hernandez and Rob Richardson.  What are their excuses?  And what about Roman Reyna?  He is currently an SAUSD Trustee and he is running for Ward 5 on the Santa Ana City Council.  Either he did not know about this or he knew and didn’t give a damn.  In either case he has egg on his face.

And there may be more to this story.  A mother at John Muir Fundamental Elementary told me tonight that kids are served milk in zip lock baggies.  Why do kids at other schools get milk cartons?  How is this hygienic?

I took a look at John Muir’s record on the O.C. Health Agency’s Food Violation website and here is what I found:

And click here to look up your kid’s school’s health violation record.

I also looked up the SAUSD itself, and here is what I found:

Click here to read the inspection report.
It really bodes ill when the SAUSD’s headquarters can’t find a way to properly store the food they serve our kids!

So who is to blame?  Well, for starters, an SAUSD administrator named Mark Chavez is their Director of Food Services.  You can email him here: mark.chavez@sausd.us.  His Administrative Secretary is named Lupita Vidal-Ramirez.  You can call her at (714) 431-1909 and email her at lupita.vidal@sausd.us.

A commenter on the OC Weekly article also wrote that “This is not the only waste the district has. The board and Sacramento should look into the Warehouse Scanners recently purchase at the 750 N. Fairview warehouse site. The Scanners cost taxpayers over $250,000.00 purchase from DATA SYSTEMS INTERNATIONAL, INC. (DSI inc.) these scanners have not been use at all. The board needs to investigate this matter and put people accountable before the pictures and data is submitted to the media. This is one of the biggies waste SAUSD has try to hide and cover up!!”

What a mess.  Take a look at the SAUSD’s administrator directory.  There are still too many holdovers left from the previous administration.  They need to answer for this debacle.

« Mark McLoughlin goes full raza in his campaign for the RSCCD Board
Dr. Mijares is already making a difference as our new Supt. of O.C. Schools »

70 thoughts on “Updated: Why is the SAUSD letting hundreds of pounds of food rot?”