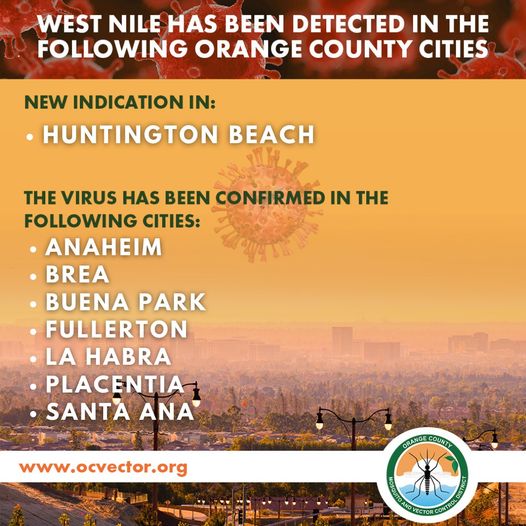 Residents can take precautions by wearing mosquito repellent when mosquitoes are more active at dawn or dusk.

West Nile virus (WNV) is a mosquito-borne disease that was originally found in Africa. In 1999, it was detected in the eastern United States; since then the virus has spread throughout the United States and is well established in most states, including California.

How do people and animals get West Nile virus?

All donated blood is checked for WNV before being used. The risk of getting WNV through blood transfusions and organ transplants is very small, and should not prevent people who need surgery from having it. Transmission during pregnancy from mother to baby or transmission to an infant via breastfeeding is extremely rare.

WNV is not spread through casual contact such as touching or kissing a person with the virus, or by breathing in the virus.

Which Animals Get West Nile Virus?

An infected mosquito can bite a variety of animals, and many animals will become infected, but only a few species exhibit disease. Disease is seen in a several species of birds, in horses, and man. Cats, dogs, bats, chipmunks, skunks, squirrels, and domestic rabbits have been shown to be infected without exhibiting disease symptoms.

What are the Symptoms of West Nile Virus in People?

Serious symptoms in a few people – Less than one percent of individuals (about 1 in 150 people) infected with WNV will develop severe illness. The severe symptoms can include high fever, headache, neck stiffness, stupor, disorientation, coma, tremors, convulsions, muscle weakness, vision loss, numbness and paralysis. These symptoms may last several weeks, and neurological effects may be permanent. WNV infection can be fatal.

Milder symptoms in some people – Up to 20 percent of the people (about 1 in 5) who become infected will display symptoms which can include fever, headache, body aches, nausea, vomiting, and sometimes swollen lymph glands or a skin rash on the chest, stomach and back. Symptoms generally last for just a few days, although even previously healthy people have been sick for several weeks.

No symptoms in most people – Approximately 80 percent of people (about 4 out of 5) who are infected with WNV will not show any symptoms.

How can I reduce the risk of being infected with WNV?