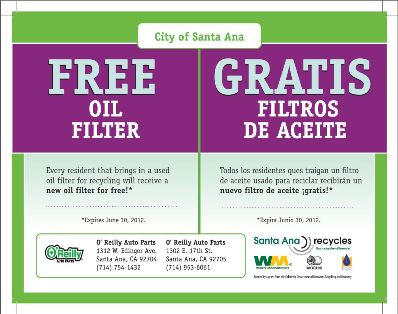 Santa Ana Waste Management and the City of Santa Ana are going to be hosting a Used Oil Filter Exchange Campaign at two locations in Santa Ana, through June 30.

Every resident of Santa Ana who brings in an old oil filter during this special promotion, to either of the two locations, will receive a brand new oil filter!

« Blueray to provide swimming classes in Santa Ana, starting on June 19
Janet Nguyen is two-faced when it comes to dealing with homosexuality »