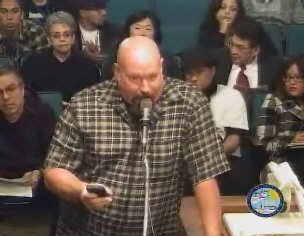 I am hearing that the only person who submitted new ward map proposals was Thomas Gordon, who currently resides in Ward 6.  Under the proposed changes he would be shifted over to Ward 4.  Gordon tried to run against Ward 6 Councilman Sal Tinajero back in 2010, but Gordon’s nomination signatures fell short.  Apparently he wants to run again when Tinajero’s seat comes up again in 2014.

Gordon’s proposed changes would shift as many as 6,000 voters around while the Council proposal would only move about 300 voters, from what I have been told.  That is par for the course for Gordon, who has become perhaps the most loud-mouthed Council gadfly.

Gordon previously ran for Mayor of Santa Ana back in 2006.  He got 24.5% of the vote, according to Smart Voter.  Stanley Fiala got 6.7% of the vote in that election and Mayor Miguel Pulido easily won with 68.8% of the vote.

Gordon works for the Los Angeles Unified School District, where he is an asbestos inspector.  He maintains a second home in Denver, CO, with his longtime girlfriend.  He often flies out there on holidays and he has told me that he flies his dog out there too, ostensibly to enjoy the dozen or so dog parks in the Denver area.  Gordon has opposed a proposal to build a dog park here in Santa Ana.

Gordon is an elected member of the Republican Party of Orange County’s Central Committee.  For some reason he got involved in the carpetbagging supervisorial campaign of Anaheim Council Member Harry Sidhu.  Sidhu lost that race to Supervisor Shawn Nelson, who was named this week to be the new Vice Chair of the O.C. Board of Supervisors.  Sidhu also ran as a carpetbagger for the 69th Assembly District’s GOP Central Committee delegation.  I believe he lost that race too.

According to the City’s website, “The City Council directed the Clerk of the Council to educate members of the community about the process taken to develop the proposed boundaries. If interested, please contact the Clerk of the Council Office at (714) 647-6520 thru Friday, January 13, 2012, to schedule a session during regular business hours. Attached for review is a map with the proposed and current boundary lines.”

« Mayor Pulido to chair Energy Committee for the U.S. Conf. of Mayors in DC
Men of Valor…RE:IGNITE 2012 – tonight at Word of Life in Santa Ana »