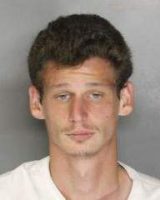 Based on the information obtained during their investigation Detectives were able to obtain an arrest warrant for suspect Salazar.  Detectives have information that Salazar drifts from location to location throughout Riverside, Orange and Los Angeles Counties and believe the suspect knows that he is wanted by police.

Detectives continue to believe there may be additional victims in Santa Ana and throughout the Southern California area involving suspect Salazar.  Anyone with information on the suspect or vehicle, please call SAPD Robbery Unit Det. Cpl. A. Silva at (714) 245-8545, Det. Garcia at (714) 245-8408 or OC Crime Stoppers at 1-855-TIP-OCCS.

SAPD Detectives have identified the type of vehicle driven by the suspect at the time of the incident. The vehicle is described as a 2015-16 white Chrysler 200 with rear collision damage. The new pictures provided of the alleged suspect are from surveillance video at a Best Buy in the City of Yorba Linda.

Synopsis: On 08/10/2016 at approximately 5:26 p.m., the 73 year-old victim arrived at the CVS Pharmacy located at 3911 S. Bristol Street. She was approached by the male suspect who parked next to her vehicle. Throughout the period of several minutes, the suspect spoke to the victim (ruse) about fixing scratches to her vehicle paint. Once the victim began to walk away from the suspect, he grabbed her purse knocking her to the ground and fled in his vehicle in a northbound direction on Bristol Street. Detectives believe that there were several other customers/possible victims who were contacted by the same suspect who may be able to assist them with additional information about the suspect and his vehicle.