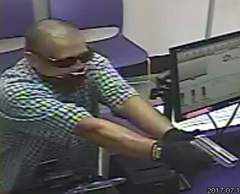 The suspect’s face was captured on video during two separate occasions. The suspect appears very anxious during the robberies and aggressively brandishes a firearm at the victims. 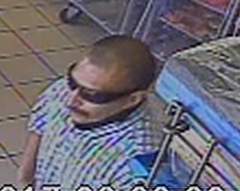 During the robbery at the Pan Dulce Bakery, the suspect demanded money from the cashier while holding a female customer hostage at gunpoint.

During the robbery at Tri Income Tax, the suspect struck the female victim on the head with the firearm while struggling for her purse.

The suspect was seen exiting and entering the right front passenger seat of the gold or beige colored Ford Explorer during the robbery at the Metro PCS on 7/17/17. 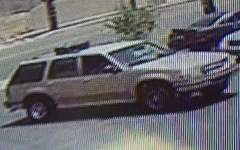 Please forward any information to Detective Greaver at (714) 245-8362 or DGreaver@Santa-Ana.org or Orange County Crime Stoppers at 1-855-TIP-OCCS.

« A man was beat up last night at Centennial Park then his attacker ran him over with a car
Madison Park Walk-A-Thon, Resource Faire and Cultural Festival set for 9/30 »