An unidentified suspect described as a 6-foot tall Caucasian male between 50-60 years old terrorized a classroom at Santa Ana College on Saturday and prompted a professor to call 911 after campus security failed to answer his calls, according to the campus newspaper, El Don.

Communication Studies Professor Vera Holder took action after the suspect entered the C-Building on the east side of SAC’s main campus. Holder was teaching a class and leading a Communications Club meeting at around 4 p.m., at the time. Holder did not recognize the suspect so she asked him if he needed help. 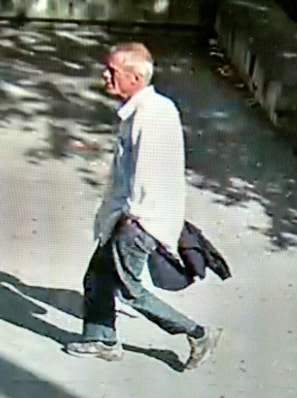 Picture courtesy of the security office at Santa Ana College

The suspect then entered her classroom, sat down and scribbled a note. Holder went to her office to notify campus security, but the suspect left while she was gone. He left behind a note that stated “Obscure abstract artist shoot world-class G-8 titan of the industry in the head.” There was also a diagram of how the shooting might occur, on the back of the note.

Upon reading the suspect’s note, Holder locked her students in a faculty office. Holder then called campus security twice and they failed to answer her calls so she called 911 and summoned the SAPD.

For additional details about the incident be sure to go read the article about this at El Don.

Former Santa Ana Councilwoman and Rancho Santiago Community College District Board of Trustees President Claudia Alvarez correctly questioned why the College pays campus security officers who are absent when they are needed. They may as well be replaced by cheaper security guards who won’t demand benefits and large paychecks.

The suspect remains at large.