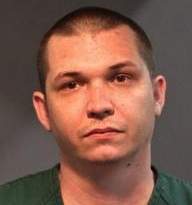 On May 31, 2020, Santa Ana PD officers observed a suspect throwing mortars at officers and deputies that had formed a skirmish line in the area of N. Ross Street and W. 4th Street.

Due to the large crowd and for safety reasons, officers watched the suspect until he left the area in a vehicle. Officers followed the vehicle, occupied by the suspect and his father, attempting to stop it. A vehicle pursuit ensued. Due to the suspect’s erratic driving, officers terminated the pursuit. The vehicle and both suspects were located at a residence in the 2600 Block of West Stanford Street, the registered owner’s address. The suspect was seen leaving the back portion of the residence by Orange County Sheriff’s Airship “Duke” and detained by Santa Ana police officers.

This driver of the vehicle, suspect Jon Paul Worden, was positively identified by officers as the suspect that threw mortars at officers and was in possession of the firearm at the protest. The passenger was identified as suspect Worden’s father. Officers obtained a search warrant for the suspect’s residence. Below is a list of items recovered during the search warrant:

“This armed suspect with access to this cache of weapons and mortars, is what our officers have been dealing with from the aggressive and violent portion of protestors during this civil unrest. Although the overwhelming majority of demonstrations have responsibly involved non-violent participants, armed suspects such as in this case, comprise the safety of everyone involved,” said Chief David Valentin.