The OCTA has invested more than $1B on Orange County streets 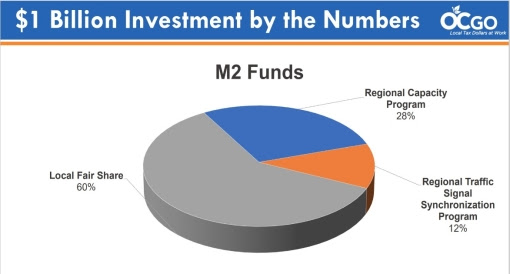 ORANGE – Through Measure M, the Orange County Transportation Authority has invested more than $1 billion in Orange County streets and roads since it went into effect in 2011, helping move people more safely and efficiently throughout the county.

That major milestone was recently highlighted for the OCTA Board of Directors, which oversees how the funds are administered to local cities and jurisdictions throughout Orange County.

“The network of streets we have in Orange County is routinely noted as the best in the state and that comes only through careful planning and strong partnerships between OCTA and our cities,” said OCTA Chairman Mark A. Murphy, also the Mayor of Orange. “Ultimately, it’s the voters of Orange County who should be thanked for this significant milestone because they had the foresight to support Measure M.”

The voter-approved half-cent sales tax for transportation improvements, first approved in 1990 and renewed in 2006, is expected to generate a total of nearly $15 billion through 2041 to improve Orange County’s transportation network.

The funds that go specifically toward streets are distributed both through fair-share formula funding and through competitive grants, helping to fix potholes and resurface streets and to synchronize traffic signals in every community.

The more than $1 billion in funds invested in Orange County has helped: