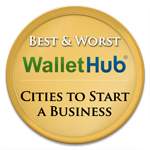 Santa Ana came in dead last in terms of having an educated workforce – at #150, which was one of the reasons the city scored so low overall in terms of being a city one should open a new business in. END_OF_DOCUMENT_TOKEN_TO_BE_REPLACED