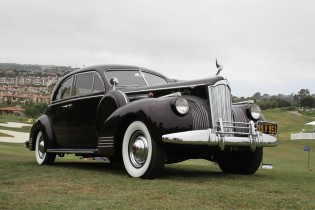 The classic Packard motor cars—many pre-WW II era—will be driven by members of the Packards International Car Club from across Southern California. Packard was an American luxury-type automobile built by the Packard Motor Car Company of Detroit, Mich., and later by the Studebaker- Packard Corporation of South Bend, Ind. Packard automobiles were produced from the early 1900s through 1958.

“We’re eager to host this event because it enables visitors to view some of the rarest Packard marques and at the same time have an opportunity to experience the Museum,” said Mark Foster, president of Lyon Air Museum.

Scheduled to be on display will be the world’s only 1941 160 Packard Super 8 Rollson convertible limousine, once owned by the Rockefeller family.

The purpose of Packards International Motor Car Club is the preservation and promotion of all Packard automobiles and all material pertaining to them; to provide a point of exchange for information and material related to same; and to provide and promote events, tours, and exhibitions featuring Packard Motor Cars. The Southern California regional headquarters of the Packards International Car Club is housed at Custom Auto Service, 302 French Street, Santa Ana.