The victim was shot at about 11:20 a.m., in broad daylight, as he was riding his bike on the eastbound sidewalk along South Raitt Street. The shooter pulled up in his car and shot the victim, according to the SAPD. END_OF_DOCUMENT_TOKEN_TO_BE_REPLACED

A female victim was located who said she was driving on Elder Street when a suspect exited his vehicle, in the middle of the street, and fired multiple times at her car. Thankfully the victim was not struck by the gunfire. END_OF_DOCUMENT_TOKEN_TO_BE_REPLACED 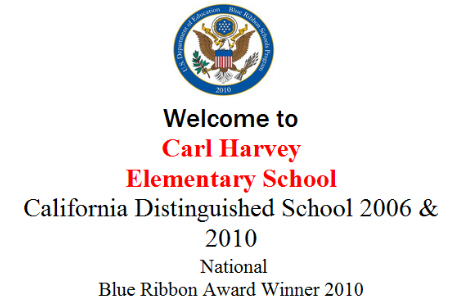 This top award honors public and private elementary, middle and high schools that are either academically superior, or have made dramatic gains in student achievement and helped close gaps in achievement among minority and disadvantaged students. With an Academic Performance Index above 800, Carl Harvey Elementary School is a 2009-10 California Distinguished School as well as a Title I Achieving School for the past two years.

Each year since 1982, the U.S. Department of Education has identified schools where students attain and maintain high academic achievement. The Blue Ribbon School Program honors public and private schools based on one of two criteria: 1) Schools whose students, regardless of backgrounds, are high performing. These are schools ranked among the State’s highest performing schools as measured by their performance on State assessments in English Language Acquisition (ELA) and mathematics; and 2) Schools with at least 40 percent of their students from disadvantaged backgrounds that improve student performance to high levels as measured by the school’s performance on State assessments or Nationally-normed tests.

“Our nation has a responsibility to help all children realize their full potential,” Duncan said. “Schools honored with the Blue Ribbon Schools award are committed to achievement and to ensuring that students learn and succeed. Their work reflects the conviction that every child has promise and must receive a quality education.”

An awards ceremony honoring the schools will be held on November 15-16 in Washington, D.C. In the past 28 years, more than 6,000 of America’s schools have received this coveted award, including SAUSD’s Middle College High School in 2009. For more information about Carl Harvey Elementary School log on to http://www.sausd.us/.