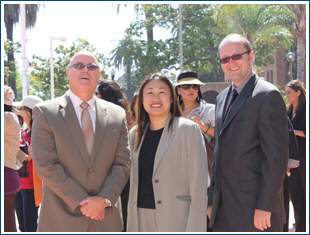 Giancola has served as Director of OC Waste & Recycling since 2009 and has been employed by theCounty of Orange for more than 30 years.

“Mike’s long career with the County shows that someonecan rise from an entry-level position to head an organization with more than 17,000 employees,” said Shawn Nelson, Chairman of the Board of Supervisors. “He has proven at each level of theorganization that he has the skills, leadership abilities and drive needed to succeed.”

During his 27 years with OC Waste & Recycling, Giancola has served in several management capacities, including as the first manager of the County’s recycling program and as Deputy Director for both the department’s Central and South Regions. During his four year tenure as Director of OCWaste & Recycling, the department has secured revised solid waste permits to provide Orange County with long term disposal capacity, has expanded renewable energy opportunities at the County’s landfill sites and has developed an educational outreach partnership that resulted in the award winning Eco Challenge exhibit at the Discovery Science Center.

Giancola first joined the County in 1977 as a Park Attendant at Mile Square Park. He served in the U.S.Navy from 1980-85 and rejoined the County’s Harbor, Beaches and Parks Department upon his discharge from military service. He began working for the County’s Integrated Waste Management Department, now known as OC Waste & Recycling, in January 1986. Giancola received his Bachelor of Arts degree in Business Administration from the University of Phoenix and is a former President of the Southern California Founding Chapter of the Solid Waste Association of North America. He is also a graduate of the Orange County Leadership Academy.

The employment agreement approved by the Board of Supervisors sets Giancola’s annual salary at$245,000. The agreement also requires that he pay the employee’s share of the normal cost of hispension benefit plus the complete reverse pick-up pension contribution.