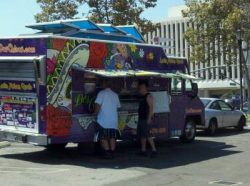 Food truck rules are not about safety

By ORANGE COUNTY REGISTER EDITORIAL BOARD

Every 10 years, the city of Santa Ana dreams up new rules and regulations to take on the purported menace of food trucks. On March 7, the City Council approved regulations which, if finalized, would impose unjustified burdens to owners of food trucks, ostensibly to “ensure public safety and prevent traffic hazards, preserve the peace and safeguard the welfare of the community.”

Under the ordinance, the Orange County Register reports, “food trucks cannot sell their wares within 500 feet of a school, park, community center or public playground; within 100 feet of a marked or unmarked crosswalk; in public streets, alleys or highways with a posted speed limit of 35 miles per hour or greater; and they cannot flash neon or electronic displays that could distract drivers.” In addition, if the trucks do not move every hour, “they must obtain written permission for employees to use a health inspector-approved restroom within 200 feet.”

Will these regulations “preserve the peace and safeguard the welfare of the community”?

Of course they won’t. These regulations will do more to fulfill a desire by brick-and-mortar business owners, some of whom spoke during the meeting, to prevent competition from food truck operators than they will make Santa Ana a safer, more prosperous city.

This isn’t the first time the city has felt the need to intervene in the food truck market. In 1994, Santa Ana imposed a set of regulations requiring food trucks to move every 30 minutes or face misdemeanor charges. Those rules were later invalidated by a Superior Court judge in 1997.

A decade later, the city tried again, with regulations requiring food trucks to move every 90 minutes. As the Register reported in 2006, “after a four-day trial, Judge W. Michael Hayes determined that the city failed to prove the food vendors threatened public safety” and those rules were similarly struck down.

Alas, the city has found it necessary to give over-regulation yet another try, with the same tired arguments blaming food trucks for whatever perceived ill one might think of. If the City Council truly has the best interests of the community at heart, they will reverse themselves and not waste the community’s time with unnecessary regulations.

« Parolee sentenced to 233 years in prison after kidnapping, raping and pimping a victim in Santa Ana
Eduardo Estrada-Luevano of Santa Ana was killed in a hit and run accident on Friday night »