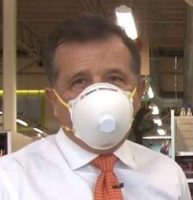 Santa Ana City Manager Kristine Ridge declared a local emergency and ordered a curfew beginning at 10 p.m. on May 31, and ending at 5 a.m. this morning, June 1.

The order was in response to civil unrest resulting from protests this weekend.

Five people were arrested from the disturbance that began Saturday night  in an area of South Bristol Street, where several hundred protesters turned out. At least two stores were looted. One sheriff’s deputy was taken to an area hospital with a lower extremity injury sustained Saturday night, according to the O.C. Register.

Santa Ana Mayor Miguel Pulido is going to term out, after over 20 years in office this November. He is not cruising to the finish line though as he has had to deal both with the ongoing Coronavirus Pandemic and now the civil unrest, rioting and looting that happened in Santa Ana over the weekend.

The City of Santa Ana supports the public’s right to peaceably assemble and protest outside the curfew hours – but not the rioting, looting and defacing of public property that happened all over the U.S. this weekend.