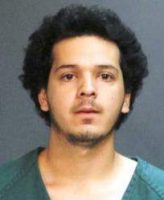 Ulises Mendoza, a Santa Ana man who crashed while driving under the influence, leaving a passenger dead and three others seriously injured, was sentenced Friday to three years in prison, according to the O.C. Register.

Mendoza plead guilty to a felony vehicular manslaughter charge and a misdemeanor driving without a valid license, under a plea deal.

Mendoza was alleged to have been speeding in his 1993 Honda Civic in the 900 block of North Fairview Drive in Santa Ana, just north of Spurgeon Intermediate School, on the morning of Nov. 21, 2013, when he apparently lost control on a curve. His car then reportedly struck a fence on the west side of the road, spun and crashed backward into a light pole.

The accident killed Mendoza’s passenger, Oliver Martinez-Iriate, 23, who was sitting in one of the rear seats of the Civic.

Three other passengers ended up hospitalized and one of them, an 18-year-old, was in a coma for several days.

When Mendoza’s blood was tested after the crash it was determined that he had a blood-alcohol content of .05, making it illegal for him to drive because he was under the age of 21.