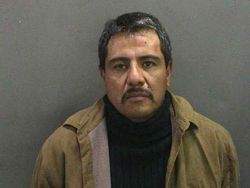 SANTA ANA – A man was sentenced to 10 years and eight months in state prison and mandatory lifetime sex offender registration today for victimizing two women and sexually assaulting a 12-year-old girl, who all lived on the same street in Santa Ana. Leonel Santana Cervantes, 44, Santa Ana, pleaded guilty to two felony counts of first degree residential burglary of an inhabited dwelling, one felony count of lewd acts on a child under 14, and one misdemeanor count of peeking.

At approximately 12:15 a.m. on July 8, 2011, Cervantes climbed into an apartment through an open window. Cervantes made noise as he walked through the apartment and caused 42-year-old resident Jane Doe #1 to notice that a stranger was in the home. The victim went to check on the noise and found Cervantes entering a bedroom, where Jane Doe #1’s 19-year-old daughter was sleeping. Two young boys, ages 6 and 8, were also asleep in the room.

Cervantes closed the door behind him and held it closed while Jane Doe #1 struggled from the other side to get it open. When the victim finally got the bedroom door open, Cervantes fled from the scene through the front door of the apartment. Jane Doe #1 immediately reported the incident to the Santa Ana Police Department (SAPD).

At approximately 4:45 a.m. on Aug. 5, 2011, 12-year-old Jane Doe #2 was sleeping in her bed, which was under the window in her bedroom. The window did not have a screen. Cervantes approached the window and put his arm inside to sexually assault the victim. He rubbed the victim’s buttocks and back over her clothing. Jane Doe #2 woke up and screamed for her father and Cervantes fled the scene. The victim’s father immediately reported the incident to SAPD.

At approximately 4:00 a.m. on Nov. 17, 2011, 31-year-old Jane Doe #3 arrived home from work and turned on her bedroom light. The victim’s bedroom window faces into an alley. Cervantes was standing in the alley and peered through Jane Doe #3’s window without her knowledge and watched her undress. The victim contacted SAPD who arrived to the scene and arrested Cervantes after finding him hiding behind a nearby dumpster.

Cervantes’ lifetime sex offender registration bars him from entering County recreational areas and City parks which have passed the Sex Offender Ordinance. Visit www.orangecountyda.com to read the prior press releases on the County’s Sex Offender Ordinance as well as the 14 other cities that have enacted the Child Safety Zone Ordinance.