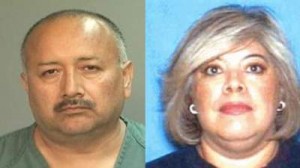 SANTA ANA – A man was convicted today of murdering his wife after she asked him to move out of their home for gambling away $100,000 in pension money and learning of his extra-marital relationship. Agustin Armaraz Espinoza, 58, Santa Ana, was found guilty by a jury of one felony count of murder and faces a maximum sentence of 25 years to life in state at his sentencing May 17, 2013, in Department C-44, Central Justice Center, Santa Ana.

Prior to July 29, 2010, Espinoza was having marital trouble with his longtime wife, Marisela Espinoza, with whom he had adult children. Espinoza gambled away $100,000 in pension money and was in possession of a pre-paid cell phone containing text messages regarding an extra-marital sexual relationship. The victim told the defendant to move out of their Santa Ana home as a result.

On or about July 29, 2010, Espinoza bludgeoned and murdered Marisela Espinoza and left her body in the bedroom of their home. He then drove to San Bernardino and attempted to use the victim’s debit card before fleeing to Mexico.

On July 29, 2010, officers from the Santa Ana Police Department found the victim’s body during a welfare check after receiving a call from the victim’s concerned co-workers, who reported that Marisela Espinoza had not been to work for two days.

That same day, Espinoza was arrested while re-entering the United States from Mexico.