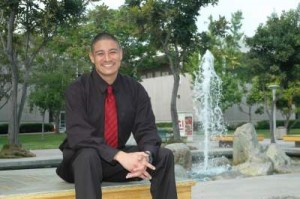 Five years ago, José Adrian Gaspar could not have imagined that he would ever wear a cap and gown to accept a degree he had earned through determination and many late nights. In 2008, he was in trouble with the law and had lost a friend through gun violence and enrolling in college was not even on his radar. But flash forward five years, and not only is he graduating from college, but he is earning two degrees and is the valedictorian of the SAC Class of 2013!

“For many of us, graduating from college has been a very long journey with struggles we have all overcome,” said Gaspar. “Whether you are a veteran returning home from Iraq or Afghanistan or an undocumented AB 540 student trying to find a better life, Santa Ana College has always been the place where we can all achieve our goals and follow our dreams as long as we persevere.”

Fortunately, Gaspar did persevere. It was his involvement with Taller San José, a non-profit organization that gave him the second chance that he needed. With Taller San José’s assistance, he understood how destructive his life had become and in the spring of 2011, he enrolled in SAC. After taking his placement exam, he realized that he had fallen behind in his studies and did whatever he could do to graduate and transfer as quickly as possible. He took up to fifteen units a semester and last summer completed seven units while interning at the Orange County Small Business Development Center.

Thanks to his hard work ethic and his dedication to his studies, Gaspar managed to maintain a 4.0 average throughout his semesters at SAC and was inducted into the most prestigious honor society on campus, Phi Theta Kappa. He was the recipient of the 2012 Robert McCarry Memorial Scholarship, and most recently, was awarded the 2013 Bret Van Tatenhove Memorial Scholarship. He has earned two Associate of Arts degrees, one in business administration and one in liberal arts, and has been accepted by California State University, Fullerton and dreams of owning his own business one day.

“I would now like to thank the entire faculty at Santa Ana College for making all of this possible. Thank you all for your support, guidance, and most importantly for believing in us,” said Gaspar.

More than 5,000 people, including more than 500 graduates are expected to attend the commencement ceremony on May 24. Among the graduates will be 24 Middle College High School graduates who will receive both their high school diplomas and associate degrees this spring.

“Commencement is the high point of the academic year at Santa Ana College,” said Erlinda J. Martinez, Ed.D., SAC president. “For our students and their families, it marks the accomplishment of a dream come true—that of accessing higher education. And for many, it is just the beginning of a future made brighter through study and determination. We salute their sacrifice that made this day possible.”

This year’s faculty speaker is Lynn Marecek, SAC professor of mathematics. Marecek has thirty years experience in teaching and tutoring at the college and high school levels. She came to SAC as a part-time instructor in 1991 and joined the full-time faculty in 1995. At SAC, her focus has been promoting student success in basic mathematics courses as she has a special fondness for the developmental math student and their unique needs.

Marecek also shares her passion for serving students outside the classroom through her work as Mathematics Department co-chair, Freshman Experience coordinator, serving as a member of the Student Success Committee, Basic Skills Task Force, Title III and Title V Committees, and as the Professional Learning Communities facilitator. In addition, she is active in a wide range of off-campus professional associations including the American Mathematical Association for Two Year Colleges, the National Council of Teachers of Mathematics, among others. She has presented on a variety of topics at local, state and national conferences for many professional organizations. Her pioneering efforts in developing and coordination of the Freshmen Experience Program have earned the program the California Community College Board of Governors Exemplary Program Award this year.

« SAPD arrests 20 men for trying to hook up with prostitutes on Harbor Blvd.
Update regarding the missing link on the Santiago Creek bike trail »