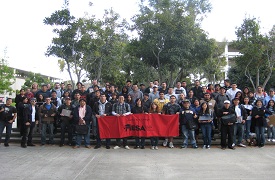 (Santa Ana)—It is hard to imagine that 21-year-old Gilberto Barrios, a high-achieving Santa Ana College (SAC) computer engineering major, is the same young man who did time in Juvenile Hall at age 16. “When I was in high school, I didn’t have the patience for studying and by the end of my freshman year, I only had 10 credits. I got into some bad influences and wound up incarcerated for a week,” says Barrios.

Flash forward. Barrios, now in his third year at SAC, was selected to attend a Mathematics, Engineering, Science Achievement (MESA) leadership conference this spring. The event included field experiments encompassing chemistry and engineering design, industry speakers, and hands-on breakout sessions. His eyes sparkle when he describes the experiment he conducted with the goal of launching mini-marshmallows using a rubber band, popsicle sticks and a milk bottle cap.

How did he get to where he is today?

After his release from Juvenile Hall, the look in his mother’s eyes convinced him he never wanted to be in that position again—her disappointment was almost too much to bear. “This was not the path I wanted to go down,” he says. Fortunately, life brought a series of good influences his way.

He remembers one positive yet “really strict” teacher with the ACCESS program who pushed him to do his work and obtain his high school diploma. Then he was drawn to an ROP computer repair class in memory of the $1,000 computer his mother had scrimped to purchase for him. Because it ran slowly, he was compelled to take it apart. Unfortunately, he didn’t know how to reassemble it.

Even detours along the way like the telemarketing job he worked in for a couple of weeks were purposeful. After that stint, he knew he did not feel good about selling people services that did not really benefit them. Then at age 17, he found out that his girlfriend was pregnant. He was jobless with a high school diploma and he didn’t know what to do. When his daughter Gracie, who was born prematurely, had some medical problems, he took a job working 12-hour days in a factory.

Then he learned of a job opportunity at the Boys and Girls Club of Garden Grove. He got the job and took to the work of assisting with the Parkview Elementary School after school program. “I matured, I had teachers and principals around me, and my coordinator Nikki Turner helped me a lot.” It was Turner who suggested he attend community college.

From the beginning, he knew he wanted to be a computer engineering major. However, when he heard of the support services MESA offered to students, he began attending meetings even before he was qualified to join. A year ago, he qualified and joined. He says that the program has provided many benefits, including connecting with other motivated students.

“I want to work in a STEM field because there aren’t very many Hispanics in these careers,” says Barrios. “I was inspired by astronaut José Hernández.”

With a 3.39 grade point average, Barrios strives for all A’s. “The MESA Program has helped me stay on top of things,” he says.

Thanks to MESA, Barrios went on a field trip to the NASA Jet Propulsion Laboratory where he hopes to work one day assisting in projects studying other planets. His academic goals include attending Cal Poly San Luis Obispo (SLO) and earning a master’s degree in computer engineering. In the meantime, he looks at his vision board every day. In the middle are SLO and JPL.

MESA is an award-winning academic enrichment program that provides educationally disadvantaged students with the tools to earn bachelor’s degrees in math-based fields. With tutoring, mentoring, study sessions, transfer counseling and study centers, MESA provides an environment that allows students to succeed and navigate the transfer system more easily. This year, Santa Ana College is the only community college in Orange County that was awarded a five-year MESA grant from the California Community Colleges Chancellor’s Office. The project serves a regional and statewide workforce development need for more STEM professionals, and the need to diversify the STEM professional workforce to broaden interest and achievement among underrepresented populations.

« UPDATE: Aguinaga won’t be running for the SAUSD School Board after all
Alderete’s fundraiser attracted many of Santa Ana’s political players »