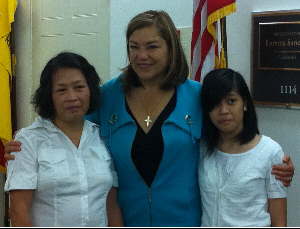 “I have great admiration for Ms. Thuy’s courage and particularly happy to have finally met her in my Washington, D.C. office,” said Sanchez. “We spent the last couple years advocating for her and many other activists as we lend a voice to their bravery in defending their basic rights. I am pleased to see the positive outcome of Ms. Thuy’s case. However, the work is not over, we must continue to call on the Vietnamese government to authorize the unconditional release of all remaining prisoners of conscience and to take concrete steps towards establishing and respecting the freedoms of speech, press, assembly in Vietnam.”

The full text of the floor speech is below and a photo of Rep. Sanchez with Tran Khai Thanh Thuy and her daughter is attached.

On October 15, 2009, I received disturbing reports that a democracy activist Tran Khai Thanh Thuy and her husband, Do Ba Tan, were beaten in front of their 13-year old daughter and imprisoned by the Vietnamese police and government.

Since then, I along with many of my colleagues have written countless letters to the Vietnamese government urging the government to release Mrs. Tran.

I have also engaged in direct conversations with Secretary Clinton strongly advocating the United States to pressure the government of Vietnam to not only release Tran Khai Thanh Thuy but to also make human rights a priority to improving US-Vietnam relations.

Fortunately, last month, thanks to the work of human rights organizations and members of Congress Mrs. Tran was released and the State Department was able to bring Mrs. Tran to the United States where she is now presiding with her daughter.

Mrs. Tran along with activists including Pham Thanh Nghien, blogger Nguyen Van Hai and Pastor Duong Kim Khai were all arrested because Vietnam continues to believe they are an exception to the law, that all individuals have the right to speak and express their thoughts freely.

It is time for the government of Vietnam to become a responsible member of the international community by respecting the rights of individuals.

Mr. Speaker, I yield back.