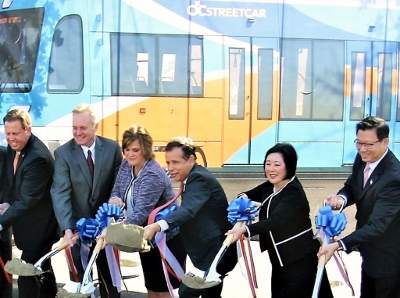 The Orange County Transportation Authority today brought together local, state and federal officials to accept a $149 million federal funding grant and to mark the start of construction on the county’s first modern electric streetcar.

Federal Transit Administration Acting Administrator K. Jane Williams and OCTA CEO Darrell E. Johnson signed a Full-Funding Grant Agreement at the Santa Ana Regional Transportation Center, which with other federal funding will pay for more than half of the approximately $408 million OC Streetcar project.
Following the signing, transportation officials joined with leaders from Santa Ana and Garden Grove – the two cities that originally developed the project – and with business and community leaders to break ground on the OC Streetcar.

“This is a truly exciting day as we officially begin construction on a new travel option in Orange County’s urban core where public transit is critical in moving residents, employees and visitors on a daily basis,” said OCTA Chairwoman Lisa Bartlett, also the county’s Fifth District Supervisor.

The acceptance of the FTA’s $149 million grant follows years of close coordination between OCTA and the FTA to plan the rail transit line.

Santa Ana Mayor Miguel Pulido, also an OCTA director, said he’s happy to see the FTA recognize the value of the OC Streetcar project and to see it now under construction.

“Reaching these two milestones is tremendous for the city of Santa Ana and for all of Orange County as OCTA moves forward on building this project that will help people travel through the heart of our county,” Pulido said.

The OC Streetcar will run on a 4.1-mile route, serving Santa Ana’s thriving downtown and dense employment areas that include county and local government offices and courthouses in the Civic Center. The streetcar will carry passengers between the busy Santa Ana Regional Transportation Center and a transit stop at Harbor Boulevard in Garden Grove, running along Santa Ana Boulevard, Fourth Street and the Pacific Electric right-of-way and connecting with OCTA’s busiest bus routes.

“The OC Streetcar project is now a reality because of significant collaboration backed by sound transportation planning,” said Johnson.

Six vehicles – with two spares – will operate daily, making stops at 10 locations in each direction every 10 to 15 minutes. The Siemens S70 streetcar vehicles will feature the OC Streetcar logo and will be painted with the familiar blue, orange and white, in keeping with other OCTA transit services.

Each vehicle has room for 70 seats and can carry up to 180 passengers at a time. The OC Streetcar is expected to carry approximately 7,300 passengers per day within its first year of operation.

The OC Streetcar project is estimated to cost $408 million. Funding comes from a mix of federal sources – including the New Starts program, state cap-and-trade funds through the Transit and Intercity Rail Capital Program, and from Measure M, Orange County’s half-cent sales tax for transportation improvements, also known as OC Go.

In September, Walsh Construction was awarded the contract to build the project and the OC Streetcar is scheduled to begin testing and operations in late 2021.