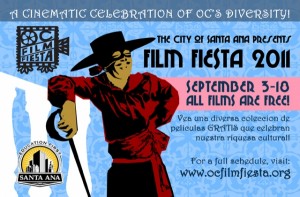 (Santa Ana, CA) The OC Film Fiesta returns to downtown Santa Ana Sept. 3-18 for another cinematic celebration of Orange County’s cultural diversity and rich Latino history. The festival opens on Saturday, September 3 with a special screen tribute under the stars to Zorro, Orange County’s own international ambassador of swashbuckling.

This special free outdoor screening of the 1920 Douglas Fairbanks classic film The Mark of Zorro will take place at 120 W. Civic Center Drive in downtown Santa Ana and will also feature a display of vintage 1920s automobiles and music from the Roaring ‘20s. The event will begin at 7pm, and the screening will take place at dusk.

Stars Hector Jimenez, Olga Segura and director Jesse Baget will be in attendance for the free red carpet screening of White Knight, which takes place Sunday, September 18 at the historic Yost Theater.

The Film Fiesta is partnering with the Vietnamese American Arts & Letters Association to expand the celebration of Orange County’s cultural diversity through cinema by screening the award-winning feature film Touch, directed by Minh Duc Nguyen as well as a selection of short films from the Vietnamese International Film Festival. Other festival highlights include the documentaries Paraiso for Sale about gentrification in Panama and Harlistas: An American Journey, a moving tribute to Latino Harley Davidson riders and their shared love of family, camaraderie and the American Dream.

Launched in 2010, the OC Film Fiesta provides an important cultural celebration for the families and residents of Santa Ana as well as patrons from around the county. Screenings will take place at the historic Yost Theater, the Santa Ana Public Library, Calacas, Original Mike’s and the Santa Ana Senior Center.