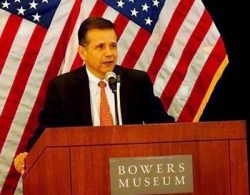 The last few years have been very tough on longtime Santa Ana Mayor Miguel Pulido. He has had to contend with a veritable cast of clowns as Councilman Sal Tinajero and his cronies took over the Santa Ana City Council majority.

Tinajero also wrote and backed a ballot measure that imposed term limits on Pulido – although Tinajero has nothing to say about the lack of term limits on the SAUSD School Board, where his ally John Palacio has been in power almost as long as Pulido.

And Tinajero also fooled the voters into giving the City Council members a raise – and he also made sure all the fat cat executives at our City Hall got raises.

Tinajero’s worst move however almost bankrupted our city when he forced ICE out of our City Jail – leaving our City no way to pay back millions in construction bond measures.

Tinajer’s final overreach was trying to topple Pulido himself this year in the Mayoral race. But Pulido got the last laugh. It was a close battle but Pulido prevailed.

Even better most of TInajero’s City Council candidates were soundly rejected by the voters. The unhinged socialist that is Paul Gonzales lost in Ward 2 to David Penaloza and the lazy campaigner Nelida Mendoza lost to Ceci Iglesias in Ward 6. Tinajero only prevailed in Ward 4 when he engineered a terrible smear campaign that toppled Pulido ally Phil Bacerra, allowing former Ward 5 City Councilman Roman Reyna to sneak back onto the City Council.

However Pulido now has a terrific City Council majority he can work with. I expect him to ally with Penaloza and Iglesias in addition to veteran City Councilman Juan Villegas.

You only have to know how to count to four to be an effective City Councilman in Santa Ana. Now Pulido has four votes on the City Council. He is now the majority leader and Tinajero has been left out in the cold.

I expect that Pulido and company will be booting our awful City Manager, Raul Godinez, any day now.

What else can we expect in the days to come? Well you can bet that Pulido and his City Council allies will boot the rest of the Council Members from the local boards and commissions they serve on. And the new majority will also take over the City Council committees.

Pulido’s main goal this coming year is to see to it that the OC Streetcar gets completed. He has spent his whole life redeveloping our city and his legacy is beyond reproach. Everywhere you look you see the businesses and organizations that Pulido helped to bring to our city.

Santa Ana is a hot mess but at least now we have a fiscally conservative City Council majority. I expect they will do great things in Pulido’s last term.