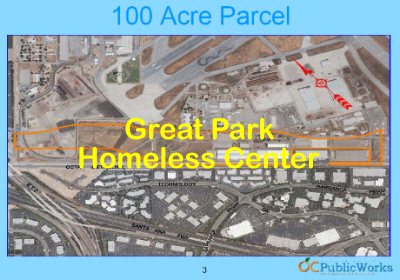 When Supervisor John Moorlach, who is the current Chairman of the O.C. Board of Supervisors, suggested in January that we turn the defunct bus station into a permanent homeless shelter, I suggested, “Why not set up a permanent encampment for the homeless over at the Great Park in Irvine?  They have plenty of space.  I am sure the OCTA can set up a bus line to give them rides to their new home.”

Apparently Santa Ana Mayor Miguel Pulido read my post.  He told the O.C. Register this week that “Long term the Great Park, whose board he sits on, could become a resource, providing space for housing and a rehabilitation center.”

Pulido also said that homelessness is not just a local problem and that too is correct.  Ignore the antics of the useless Occupiers – they aren’t going to solve homelessness or any other issue.  And as Pulido indicated  start putting pressure on Gov. Jerry Brown.  Homelessness is a state problem – and a societal one at that.  Perhaps if Brown wasn’t continuing to feed the police state he inherited from Gov. Arnold Schwarzenegger we might have the money to help solve the homeless crisis…

14 thoughts on “Mayor Pulido agrees with me, we should house the homeless at the Great Park”