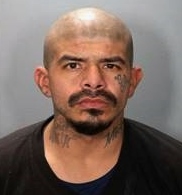 SANTA ANA, Calif.- A Los Angeles felon with a long criminal history has been charged with ripping a Brea police officer’s gun out of his holster and taking the officer’s taser while the officer attempted to arrest him on a warrant Wednesday. A bystander who witnessed the struggle intervened to help the officer subdue the man and take him into custody.

Villalba has a prior strike conviction under California’s three-strikes law for a second-degree robbery and a felony conviction for manufacturing an improvised gun.

He is scheduled to be arraigned in CJ1 today.

On February 2, 2022, at around 1:33 p.m., a Brea police officer noticed a blue Hyundai Elantra associated with a prior Brea police arrest and identified the driver, Villalba, as having an outstanding felony warrant.

The officer attempted to pull over the driver, who eventually pulled over in the parking lot of a Home Depot located on Harbor Boulevard in the city of La Habra. When the vehicle stopped, Villalba was wearing a camouflage tactical vest when he ran from his vehicle. The officer chased Villalba, who abruptly ran back to his vehicle, where his girlfriend had exited the vehicle and was standing next to it.

Villalba is also accused of repeatedly telling his girlfriend to grab the officer’s gun. She refused.

“Here in Orange County, we do not tolerate violence of any kind and we support our police officers. If you attack a police officer, we are going to throw the book at you,” said Orange County District Attorney Todd Spitzer said. “Violent assaults against police officers are on the rise across the country with 36 percent more police officers killed in gunfire last year compared to 2020. Traffic stops are especially dangerous for officers because they never know what kind of situation they are walking into.”

Deputy District Attorney Dustin Chupurdy of the Crimes Against Peace Officers’ Unit is prosecuting this case.