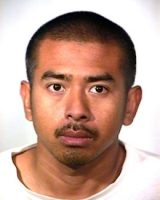 SANTA ANA, Calif. – A man was sentenced today to 55 years to life in state prison for assaulting a 2-year-old child causing his death. Lae Thongphun, 34, Garden Grove, was found guilty by a jury Dec. 14, 2015, of one felony count of involuntary manslaughter and one felony count of assault on a child under 8 years of age with force likely to cause great bodily injury causing death with a sentencing enhancement for a prior strike conviction for a first degree burglary in 2007 in Los Angeles County.

At the time of the crime, Thongphun was in a romantic relationship with a woman and lived with her and her two young children in an apartment in Garden Grove.

On Aug. 28, 2009, Thongphun was responsible for taking care of 2-year-old Fox Le and his sister, while their mother was out of the home to attend a birthday celebration. Shortly after the mother left the home, Thongphun intentionally stepped on Le’s stomach. The defendant then called Le’s mother to tell her that her son was not breathing.

At approximately 10:48 p.m., officers from the Garden Grove Police Department (GGPD) and paramedics arrived at the home and found the victim not breathing and his face covered in blood. Paramedics rushed the victim to the hospital where Le was pronounced dead. GGPD subsequently arrested Thongphun.

Upon further investigation, it was determined that Le suffered multiple wounds to his abdomen, which caused fatal gastrointestinal hemorrhaging. The victim’s body also showed symptoms of previous physical abuse, including wounds that were days and weeks old. The defendant previously struck the victim repeatedly as punishment.

« Additional charges filed against the three OC Jail escapees
O.C. Gangbanger who snitched on the Mexican Mafia gets a lighter sentence »