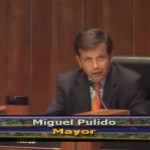 Labor Day is the traditional start of the campaign season and that is why I have waited until now to take an official position regarding the Mayor’s race in Santa Ana.  This years election features five men vying for the city’s top job,  they are Roy Alvarado, George Collins, Charles Hart, Alfredo Amezcua and Mayor Miguel Pulido.  While the race may include five candidates in reality it is a race between two, Amezcua and Pulido.

Having known Alfredo and Miguel for many years I have come to like both men personally even though I may not have always agreed with them politically.  In the case of Mayor Pulido I was an enthusiastic supporter of his in 1986 when he first ran for the city council.  He represented the little guy who fought city hall and won.  I admired that and was glad to see him allign himself on the council with my good friend John Acosta.

Then-Councilman Pulido seemed to stray from that alliance and joined forces with the Dan Young-Dan Griset faction of the council.  This move put Pulido in the camp of the original “usual suspects” and saw him stray from fighting for the little guy to being part of the machine.  I became quite disillusioned with Pulido.  My disdain for his politics hit its peak when he battled Councilman Ted Moreno and orchestrated the recall of Nativo Lopez.

I became so disillusioned with Mayor Pulido that on the “Santa Ana Citizens” Yahoo group I chose to go by the moniker “Dump Pulido”.  I was very disappointed in the policies being put forth by the Mayor and his allies.  He seemed to have abandoned the principles that he espoused back in 1986, principles that had endeared him to city hall outsiders like me.

During these years that Pulido joined forces with the Young-Griset faction putting forth an agenda set by the likes of Mike Metzler and company one of his biggest allies was none other than Alfredo Amezcua.  Amezcua was very much a part of the inner-circle of folks looking to prop up the old guard establishment.  In fact I remember quite clearly seeing he and Councilman Jose Solorio at the Registrar of Voters office celebrating the recall of Nativo.

However four years ago things began to change.  With the election of Sal Tinajero and Michele Martinez to the council and then the appointment of Vince Sarmiento it appeared that the old Miguel from 1986 began a resurrection.  He began to return to the roots from which he came and started to support a much more progressive agenda.  He seemed to form a new alliance with Claudia Alvarez, Tinajero, Sarmiento and eventually Martinez.

I knew Miguel had begun a transformation when he told me that I had his full support to serve on the Planning Commission in the face of frantic opposition from the likes of the Stroud’s, Debbie McEwen and Tim Rush.  Miguel has continued to oppose the “usual suspects” by supporting the removal of Thomas Gordon, Glen Stroud and Tish Leon from their positions on city commissions.

Where at one time Miguel was all in with the “usual suspects” he has clearly turned the corner and no longer carries their water.  He now supports an agenda that appears to be in stark contrast to the agenda of what those folks want and it is one that is much more progressive and in line with what people such as Art Pedroza and myself want to see for our city.

Despite all this talk about change and a new direction from the Amezcua campaign, it appears that he is still alligned with many from the “old” Pulido faction.  While many of Alfredo’s supporters are folks that I consider friends such as John Acosta, Sam Romero and Dr. Art Lomeli, I also see many “usual suspects” lurking around as well.

Alfredo played the leading role in SACRED.  While many of these folks were well intentioned there was also an equal number of folks that were not.  After attending one meeting and seeing that the group was made up of folks like the Stroud’s, McEwen, Gordon and Mike Tardif and seeing that Alfredo had chosen to be associated with these folks was very disappointing.  It also sent the message that Alfredo had not changed but Miguel definitely has.

So after weighing all the evidence and exploring all the options I came to one conclusion and one conclusion only, that is to support the re-election of Mayor Miguel Pulido.  Mayor Pulido and the council majority are taking the city in a new direction, one in which all our residents will have a voice not just those elite few that always did in the past.  The re-election of Pulido, Tinajero and Martinez is so very important to keeping us on this new progressive path as they join Alvarez and Sarmiento in creating a better future for us all.

So I have made the transition from “Dump Pulido” to “Vote Pulido” and I am quite confident that this is the right thing to do.  I hope you will all join me in doing the same come election day.

One thought on “From Dump Pulido to Vote Pulido”