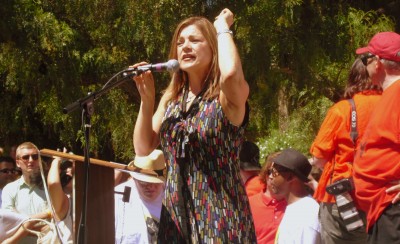 SANTA ANA, CA (August 1, 2014) – The public is invited to attend the City Council Meeting on Tuesday, August 5, 2014 as the Mayor and City Council will recognize Congresswoman Loretta Sanchez and the Founders of the Artists Village for their outstanding contributions to the City of Santa Ana.

Congresswoman Loretta Sanchez was born and raised in Orange County and in 1996 she became the first Hispanic woman ever elected to Congress from Orange County. Congresswoman Sanchez is the highest ranking female on the House Armed Services Committee and the Homeland Security Committee. She is the leading voice in Congress for women in the military and is an active volunteer within her local community.

The Mayor and City Council will also recognize the Founders of the Artists Village – Downtown Santa Ana’s concentration of creative and artistic talent. More than a dozen people contributed to the growth and development of the Artists Village and helped shape it into the regionally recognized hotbed of art that it is known for today.

Councilwoman Michele Martinez will also recognize the students who competed in the USA National Karate Federation’s National Championships in July.