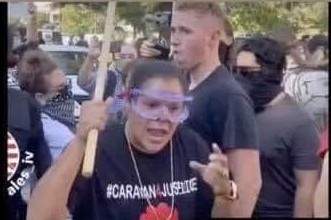 SANTA ANA, Calif. – A protest organizer has been charged with attempted murder, six counts of assault with a deadly weapon and multiple other felonies in connection with pepper spraying several counter protesters and then driving her car through the crowd, running over the head of one protester and breaking the leg of another, during a protest in Yorba Linda Saturday.

Tatiana Rita Turner, 40, of Long Beach, has been charged with one felony count of attempted murder with premeditation and deliberation, six felony counts of assault with a deadly weapon, including one causing great bodily injury, one felony count of mayhem, and two felony counts of the use of pepper spray by a felon.  Turner faces a maximum sentence of seven years to life plus 13 years and four months in state prison if convicted on all charges. She is scheduled to be arraigned in CJ1 today.

She has previous felony convictions for drug sales and domestic violence.

On September 26, 2020, Turner helped her protest group organize the March 4 Equality protest outside of the Yorba Linda Library in conjunction with other Black Lives Matter Groups. Many protesters in that group were outfitted with helmets, tactical vests, riot shields, and tasers. At the same time a larger group of President Trump supporters had also planned a rally in the same area. The two groups converged on each other and Turner is accused of pepper spraying two counter protesters during the confrontation.

Turner is accused of waving a wooden baton at protesters before getting in her car and driving through the crowd, running over the head of one woman and breaking the leg of a man. She was stopped a short while later by Sheriff’s deputies.

“The Orange County District Attorney’s Office will not tolerate these professional militant organizers who are armed with weapons and teaching defensive tactics to counter police efforts to curb violence,” said Orange County District Attorney Todd Spitzer. “We support the right to peacefully protest, but these are not peaceful protests. These are organized protests that encourage others to engage in civil disobedience. When pepper spray and other displays of force failed, she positioned her vehicle to be used as a backup weapon and she used that vehicle as a deadly weapon, willing to injure and kill those who stood in her way. She then tried to evade a pursuit until stopped. We are reviewing all surveillance footage to identify other suspects, regardless of what side of the political aisle they are on. We will prosecute anyone using force or unlawful intimidation tactics against any person or group. My advice: stay away from these events. They are not intended to be peaceful. Despite the best of intentions, there are now participants who are there for the sole purpose of escalating to unlawful violence, which is no doubt going to result in injuries, possible deaths, arrests and prosecutions. While we will always defend the right to peacefully protest, I am urging you to just stay away.”