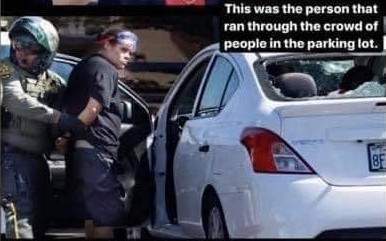 YORBA LINDA, Ca. (September 26, 2020): A protest today resulted in two arrests and injuries to multiple individuals, with a vehicle driving into a crowd and striking two individuals.

On September 17, the Orange County Sheriff’s Department became aware of a protest planned in the city of Yorba Linda for today at 2 p.m. by a group called Caravan for Justice. Shortly after, a counter protest was planned for the same time. Deputies were present at the beginning of the protests to protect the constitutional rights of all individuals and to protect life and property. Just after the beginning of the protests, it is estimated there were approximately 150 individuals total.

Approximately 30 minutes after the protests began, we began to receive reports of physical altercations occurring between the two protest groups, including at least one individual who was pepper sprayed by another protestor. At that time, the crowd grew to approximately 250 protestors. Due to the physical altercations and reports of individuals within the crowd having weapons, an unlawful assembly was declared and a dispersal order was issued. One man, Jason Mancuso, 46, of Anaheim, was arrested for failure to obey the dispersal order.

At approximately 3 p.m. after several dispersal orders, a vehicle in the parking lot of the Yorba Linda Public Library at 18181 Imperial Highway struck at least two individuals. The driver, believed to be part of the Caravan for Justice, continued to leave the parking lot and was detained a short distance away from the incident. The two people struck, a man and a woman believed to be at the protest, were transported to a nearby hospital with major injuries but are expected to survive.

The driver, Tatiana Turner, 40, of Long Beach, was arrested. She will be booked into the Orange County Jail for attempted murder and assault with a deadly weapon, and the investigation is ongoing.

The Orange County Sheriff’s Department requested mutual aid, and multiple agencies from across Orange County responded immediately to assist. We’d like to thank the outside agencies who responded.

By 4:30 p.m. the crowd had dispersed and all roads in the city were reopened.