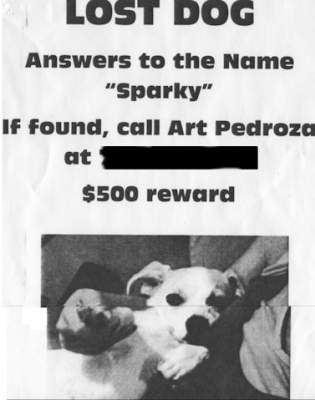 UPDATE: My daughter filed a police report.  I imagine that the suspects we named are going to have a rough time with the SAPD tomorrow…

I received a panicked phone call from my son Joey last night.  He is at UCLA, where he lives in an off-campus apartment with other students.  He was wondering if our dog Sparky was lost.  This took me by surprise as Sparky was sitting next to me on the couch.  So I asked Joey why he thought Sparky might be lost.  And that is when this tale took a turn for the weird.

Someone apparently put up lost dog fliers all over Downtown Santa Ana and in my own neighborhood.  The fliers include my name and cell phone number and a picture of my dog that was posted a long time ago on Facebook.  A friend of Joey’s saw the flier on a pole, while he was at the Downtown Santa Ana Art Walk last night and he texted the picture to Joey.  We later found a flier on our own street, also on a pole.  That means whoever is behind this walked right by my home…

What to make of this?  Why would someone go to such lengths on what is either a stupid prank or worse perhaps a threat?

It is bizarre and not welcome.  This is not the first time my family has been targeted but this is certainly the creepiest episode by far.  If this was meant to be a prank, it was not funny.

My father told me many years ago about an uncle he had in Mexico, who was a journalist.  He was murdered by some criminal cartel because he reported the truth and they didn’t like it.

I am just a blogger but we do cover Santa Ana politics on this blog to an extent unseen anywhere else.  Could this be some whacked out plot by unknown parties upset about something I reported?

Mayor Miguel Pulido’s family was attacked just last November, by allies of the current City Council – as one of them, David Benavides, was trying to defeat Pulido.  That attack was an epic fail as Pulido went on to wreck Benavides on Nov. 6.

It is sad that there are elements in this town who would resort to such insanity.  Feel free to debate the issues here but please don’t come after my family – or our dog.  He is not lost but if something were to happen to him now this would go from a prank to a crime.  And my neighbors will be watching…