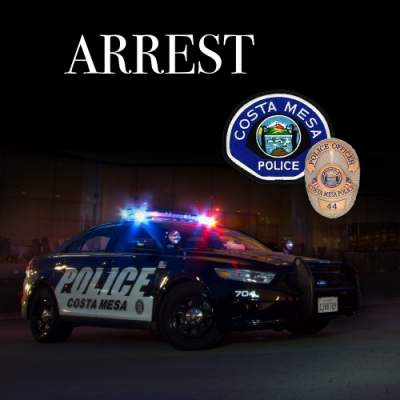 COSTA MESA, Calif. (Oct. 28, 2021) – The Costa Mesa Police Department (CMPD) has arrested a suspect wanted for an attempted homicide that occurred earlier in the year.

On March 2, 2021, at approximately 5:40 a.m., CMPD officers responded to a call of shots fired in the 2000 block of Harbor Blvd. Upon their arrival, officers learned a 30-year-old man from Costa Mesa had been shot and had been driven to a hospital.

Officers located the victim, who was being treated for a gunshot wound to the neck at a nearby hospital. It was determined the victim heard a disturbance between a man and a woman. After hearing the woman scream, the victim went to the parking lot to investigate. He saw a woman running away and the suspect, Max Diamond, 29, Norwalk, chasing after her. The victim, concerned for her wellbeing, followed Diamond. The woman was able to get away by running south on Harbor Boulevard. Diamond then turned around and confronted the victim.

While Diamond was standing face to face with the victim, Diamond pulled a gun from his waistband and shot him. Diamond then fled the scene by running north on Harbor Boulevard.

During the ongoing investigation, CMPD detectives identified Diamond and began to search for him including a Wanted flyer broadcast to law enforcement.

After several days of not locating Diamond, on March 17, 2021, CMPD warned the public and sought assistance to locate the suspect by releasing information about the attempted homicide along with his photo.

Yesterday, Oct. 27, 2021, after learning where Diamond and the woman were staying, detectives were able to follow a vehicle Diamond was traveling in to a gas station at the 2600 block of La Palma in Anaheim, where he was arrested without incident.