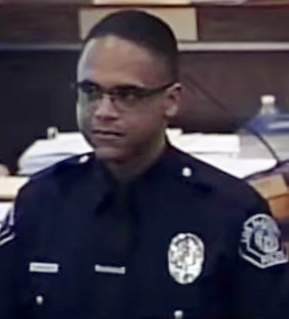 “We must hold accountable the people we have placed in positions of trust to protect us,” District Attorney Gascón said. “That is especially true for the armed personnel we traditionally have relied upon to guard our children on their way to and from and at school.”

Gonzalez was charged in case NA118308 with one count of murder. His arraignment is expected to occur on Friday in Department S01 of the Los Angeles County Superior Court, Long Beach Branch.

On September 27, Gonzalez was patrolling an area near Millikan High School in Long Beach when he noticed an altercation between 18-year-old Manuela Rodriguez and a teenage girl.

Rodriguez got into the rear passenger seat of a nearby car. Gonzalez allegedly fired his handgun at the vehicle, striking Rodriguez.

She was taken to a hospital where she died approximately a week later.

The case remains under investigation by the Long Beach Police Department.

Earlier today, Homicide detectives presented their case to the District Attorney’s Office for filing consideration. At approximately 11:30 a.m., detectives from the Special Investigations Division arrested 51-year-old Eddie Gonzalez in the City of Orange without incident. He was booked for a murder warrant filed by the Los Angeles County District Attorney’s Office and is being held on $2,000,000 bail.

Anyone with any information regarding the incident is urged to contact LBPD Homicide Detectives Ethan Shear or Jose Rodriguez at (562) 570-7244. Anonymous tips may be submitted through “LA Crime Stoppers” by calling 800-222-TIPS (8477), downloading the “P3 Tips” app to your smartphone (available at the Apple app store or Google Play), or by visiting www.LACrimeStoppers.org.

Yesterday, Oct. 6, 2021, Manuela “Mona” Rodriguez, who was struck in the upper body in a shooting incident on Sep. 27, 2021, succumbed to her injuries. In light of this news, detectives are now investigating this matter as a homicide.

On Sep. 27, 2021, at approximately 3:12 p.m., Long Beach Police Department (LBPD) officers responded to the area of Spring Street and Palo Verde Avenue regarding a hit shooting.

Upon arrival, officers determined a Long Beach Unified School District school safety officer had discharged their firearm, striking Rodriguez in the upper body. Long Beach Fire Department personnel responded to the scene and transported her to a local hospital where she was initially listed in critical condition.

The preliminary investigation revealed the school safety officer was driving when he observed a physical altercation between an adult female (Rodriguez) and a 15-year-old female juvenile victim occurring in the street. Investigators have determined a 20-year-old male adult and a 16-year-old male juvenile were also involved; however, their participation level remains under investigation.

When the male adult, the male juvenile, and Rodriguez attempted to flee in a 4-door gray sedan, the school safety officer approached the vehicle to prevent them from fleeing and discharged his firearm. Rodriguez was in the front passenger seat of the vehicle and was struck by gunfire.

At the time of the incident, the school security officer was employed by the Long Beach Unified School District and was not employed nor affiliated with the Long Beach Police Department nor the City of Long Beach.

The LBPD is conducting a criminal investigation of this incident and is sharing this information with the Los Angeles County District Attorney’s Office for their independent review.

Homicide detectives are in regular communication with the Los Angeles County District Attorney’s Office and are providing evidence from the ongoing investigation to them for filing consideration.

Anyone with any information regarding the incident is urged to contact LBPD Homicide Detectives Ethan Shear or Jose Rodriguez at (562) 570-7244. Anonymous tips may be submitted through “LA Crime Stoppers” by calling 800-222-TIPS (8477), downloading the “P3 Tips” app to your smartphone (available at the Apple app store or Google Play), or by visiting www.LACrimeStoppers.org.